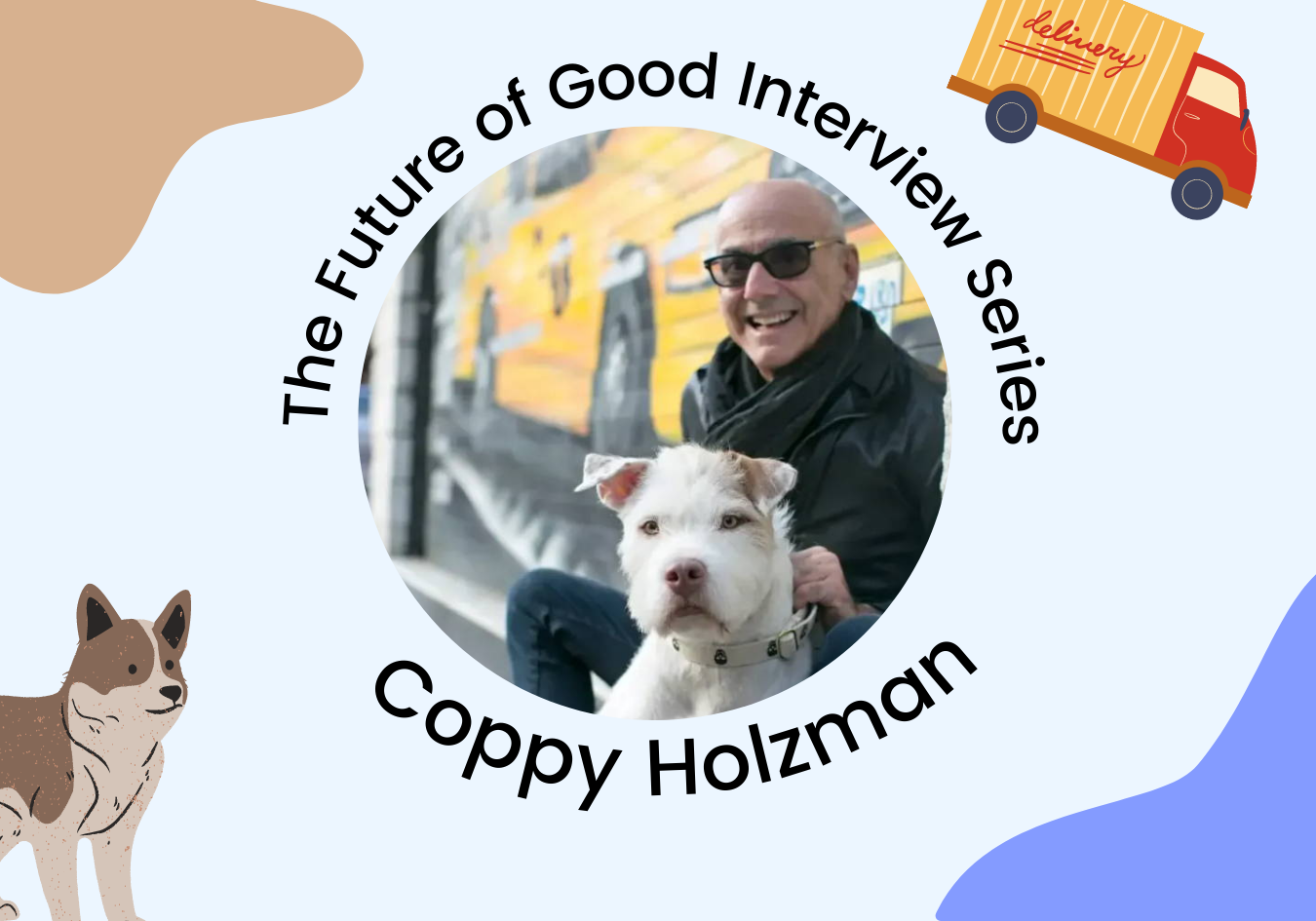 This interview is the first episode of The Future of Good, a series that explores the intersection of social impact, technology, and entrepreneurship.

Key Takeaways from this Episode:

This interview has been condensed and edited for clarity and length.

Geng: Coppy, thanks so much for joining us on the show today. We’re super excited to have a productive conversation about social entrepreneurship, philanthropy, and your fascinating career across all the things that you’ve done, so thanks for joining us today.

Coppy: Thank you. It’s my pleasure to be invited to help - anything with Civic Champs.

Geng: We appreciate it. So, as a public benefit corporation, we obviously care a lot about social enterprises, and, with you, Coppy, I feel like you were way ahead of the curve with CharityBuzz.  I’d love to just start off by hearing from you about what prompted your career in social enterprise and what inspired you to launch CharityBuzz.

Coppy: I've always had a belief that you should contribute and help people and give back, it’s part of the DNA. It’s what I was taught and what I’ve taught my grown adult children. So, through my career, I’ve always had that and there was always x amount of my time spent at that avenue. I worked at department stores like Macy’s, Federated. I was fortunate at the start of the .com boom. I launched a company that did really well, so that gave me a certain degree of financial independence, and, from that, I wanted to take that financial independence and make a difference.

I believe in the model that it’s good business to do good.

I believe in the model that it’s good business to do good and there’s nothing wrong with making money while you’re doing good and social enterprises. That’s always been my belief and it’s still my belief and what I do in my current business. I had done well at WebVan and had a lot of time to work on charity initiatives, and was at a fundraiser for the Clinton Library with President Clinton, Sir Paul McCartney. I had never met them, but the host introduced me to all of them. This was a long time ago and the internet was still very new - the host asked if I had any ideas on how I could use the internet to raise money for them, so I’d like to say I had a big strategic plan, but that would be a blatant lie. It was more a spontaneous response. I said ‘why don’t we auction off hanging out with Sir Paul and President Clinton? We’ll put it on the internet. Sell it for a ton of money.’ I said it half in jest, but they all agreed, so I followed up with ‘are you sure?’ And they go ‘yeah,’. This is a while ago, so President Clinton was just recently out of office, and they all shook my hand and said ‘we agree,’ and I called up a programmer that worked for me part time and said ‘we’re building an auction site,’. I didn’t charge for it, but it did really well. Also, to get publicity for it, I knew someone at the Today Show. This was all working out of my house with one part time person. It did really well. Of course, the site crashed, but, from that, I got President Clinton as a client for his charity, The Clinton Foundation. So those were my first clients. It was just a hobby, but I had two people working out of a bedroom in my house. Long story short, you need to get an office, so you get an office, and you can incur more expenses. Next thing you know, I turned it into a pretty decent sized business. But it all started with a desire just to make a difference and respond to trends. One of the many features I like is that you have people engaged and you encourage them, while they’re engaged, to make a donation. That’s taking an activity they’re normally doing and monetizing it to raise more money for their organizations.

Geng: And what an amazing initial client list to start off with with those folks. That’s an amazing start that you guys had. Actually, if we look at your background, I’m curious, you mentioned WebVan very early on as the company you launched right before CharityBuzz. . How do you  think that experience impacted your ability to run CharityBuzz? It seems like you were really able to execute quite quickly and put everything together. Do you think that was a big factor?”
‍

Coppy: I think probably like the DNA that you’re building at Civic Champs, when you put together a team that has the right skillset and everyone’s treated with respect, and you have people in the right jobs - right roles with the right responsibilities, I realize that that’s important no matter what organization you have - putting together the right team where you’re all reading from the same script and also know where you’re going.

But I think one of the biggest skills I do have that I’m doing with my current cafe business now is building a community, and, if you can identify a community and deliver to that community what they want and not only meet, but exceed those expectations. So at Webvan, that was late nineties, we were trying to replace the shopping up and down the aisle in the supermarket experience, and taking that experience and delivering it online and delivering it to people at home. It sounds so obvious now, but this was the late nineties when internet penetration was only mid-twenties, now it’s ubiquitous. So what we found there is that people had a lot of guilt about not doing their own shopping, so produce was the one category where we thought, if you could deliver peaches that weren’t crushed or that were succulent and deliver them well, that sort of set the bar. Obviously soap, or Campbell’s soup, or milk - it is what it is because it’s packaged. Produce is something people put a lot of care into, so we put a lot of extra care into how we packaged and delivered them. We also were environmentally responsible. So that community that I built there - same thing at CharityBuzz. You try to make sure that scheduling is easier, the experience is wonderful, or if there’s a problem (like with COVID, things were cancelled), you give back the money. Who cares? You’ll get it back or schedule it for something else. And I find the same thing in my current cafe business. If you exceed people’s expectations, just like you do at Civic Champs with volunteers, most people are wonderful.

If you embrace that most people are wonderful and exceed their expectations, it doesn’t matter what it is. You also just have to be focused on what you’re offering them, so you’re giving them what they want.

If you embrace that most people are wonderful and exceed their expectations, it doesn’t matter what it is.

Geng: Taking another page from that, it seems like you have this really interesting mix of entrepreneurship, social enterprise. You deal with a lot of nonprofits, and a lot of our listeners are in social enterprise or the nonprofit space. What tips might you have for a volunteer manager or a development director? What concepts would you suggest or recommend that they take a page out of - whether that’s CharityBuzz or Webvan?

Coppy: That’s a good question, Geng. I think, as in anything and, being an old guy, I think one of the things that’s good is to listen to people. Like a development manager. If you listen well to what people want, you’ll be able to deliver it, so that’s step one. I think step two is being authentic. I know I’m super blessed and super fortunate that I’m able to spend a lot of time on different charities, and I actually think it’s kind of selfish for me cause I feel really good about it. I help someone, and, truthfully, it’s kind of selfish because I feel really good about it, so I benefit probably as much as they do. But I am only involved in those charities and those organizations that resonate with me, which might be different than what resonates with you. So I think being authentic and not trying to do something that doesn’t make you feel good or make the other person feel good is equally important also. So being authentic, listening, and also having a sense of awareness: I know what I’m good at. I know what I’m bad at.

Geng: Sure. So, understanding your volunteers or donors, making sure that they’re able to enjoy the experience - that you’re delivering on that customer experience in the same way, and understanding what is it that they both enjoy and can bring the most value so that they have a good experience.”

Coppy: Exactly, and then, for volunteerism, and also not overpromising. It’s better to underpromise, as you well know, and overdeliver. And stuff comes up. Things come up. If there’s this snafu, embrace it. Own it. Don’t try to sweep it under the carpet. And also, as we well know, over the last year or two, I opened cafes. They were rolling along really well - I was under construction with some other ones. Certainly, none of us planned a global pandemic where the doors are locked and no one can leave their house. You just have to embrace it, and roll with it, and deal with it and, no matter what it is, life is a journey, and we just have to learn to take those punches and make the best of it.

Geng: “Taking advantage of even what looks like a disaster potentially --”

Coppy: Yeah. And what can you do to make the most of it? Exercise, eat better, learn something. All those things people say. But we’re also blessed, I think, all of us are kind of blessed because, also it’s an opportunity. There are a lot of people who lost their jobs and didn’t have food or didn’t have housing or didn’t have this or that, so go help them. Stop focusing on yourself and go help them. I mean, I live in NYC and all you have to do is - I could walk two blocks from my house and see hunger lines. Things weren’t so good, so stop feeling sorry for yourself and help someone else. That’s probably the best medicine there is.

Geng: Right. There’s so many studies that show that volunteerism improves your mental state, makes you more connected with your community, so I couldn’t agree more. Last question- what’s either one thing that you would ask our listeners to do or what’s one takeaway that you’d like to leave with aspiring social entrepreneurs and nonprofit leaders?”

Coppy: I guess one thing I’d like the listeners to do is think about what more Civic Champs can provide, because I think it’s such a wonderful service and we’ve spent a lot of time talking about your features and attributes, and I know some of your short and long term plans, but I think community is really important. So, I would encourage everyone who is listening to say ‘Alright. Civic Champs does x, but if it did y and z, I would like it even more.’ The goal is quite simple, if you want to raise as much money as possible for your cherished nonprofit partners, and make it as easy as possible, ask anyone listening ‘how can we take what’s wonderful at Civic Champs and make it even better?

About the Author:
Darcy Neureiter

Get the latest news and updates from Civic Champs
Thank you! Your submission has been received!
Oops! Something went wrong while submitting the form.
Darcy Neureiter